At first this looks like a competitive launch to Rapha, but a closer looks reveals this is even more expensive. $310 merino t-shirts make Rapha almost seem like a bargain.

I do actually like the goods though. The styling is sharp and looks performance oriented as well if not more urban in use.

It’s almost the weekend and I’m thinking about riding … Rapha’s just emailed about a cool ride, though unfortunately  it’s in London.  UK friends … get on it!

Our homage to one of the great monuments of the sport, Paris-Roubaix, will be an adventure along the lanes, bridleways and dirt-roads of Hertfordshire. Although it won’t have as much pavé (in fact it will be gravé) as northern France it will be tough and potentially filthy. Muddy terrain and bumpy ‘rough stuff’ will be encountered as we celebrate the Queen of the Classics over 100km. 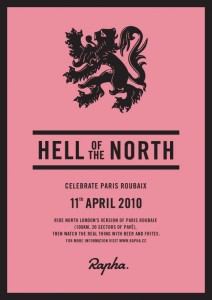 Rapha certainly knows how to capture their events … I’d love the opportunity to do one of these destination rides, or perhaps one from the next cycle of the Continental.